In a slow cooker, the food is slowly cooked at a temperature of at least 165 Fahrenheit to a maximum of about 200 Fahrenheit. At these low temperatures, the food is cooked gently and meat dishes such as stews or chiles are particularly tasty. Most slow cookers have 3 temperature levels to cook at, some models also have a keep warm level.

And yes, even if the temperature at which a slow cooker cooks is lower than regular cooking on the stove, it is hot enough to kill bacteria and germs, and the food will cook and be done. Slow cooking food at low temperatures for a long time is just another method of cooking.

The actual temperature will also depend on the level of food in the pot. Obviously, a low filled pot will become hot quickly and reach a higher temperature than a full pot.

What temperature does a slow cooker cook at?

But what is actually way more important – than the questioning: what temperature does a slow cooker cook at – is how those temperature settings affect cooking time.

Different slow cookers cook differently. You need to get to know your slow cooker and learn how long to cook food in the slow cooker for best results.

As a rough rule of thumb, one hour HIGH equals about 2 hours on LOW.

If the pot is full to the brim cooking will take a bit longer, if the pot is only half full temperatures in the pot become higher, and cooking may be quicker.

What happens when you slow cook meat?

Slow cooking produces delicious meals and especially meat can turn out to be incredibly tender and juicy. When the meat is cooked at low temperatures several processes take place. The most notable when slow cooking is:

In regular cooking where the boiling temperatures of water (212 F) is reached, the water turns into steam and evaporates. As water is in most foods, cooking them at high temperatures dries them out.

What happens in a Slow Cooker?

When slow-cooking meat at low-temperature, this temperature gradient is very little. The perfect cooking time plays a much smaller role as the ideal temperature cannot be exceeded at all. Most of the liquid remains in the meat and can be absorbed by the connective tissue turning into gelatin. The meat becomes soft and tender.

What meat cuts are suitable for slow cooking 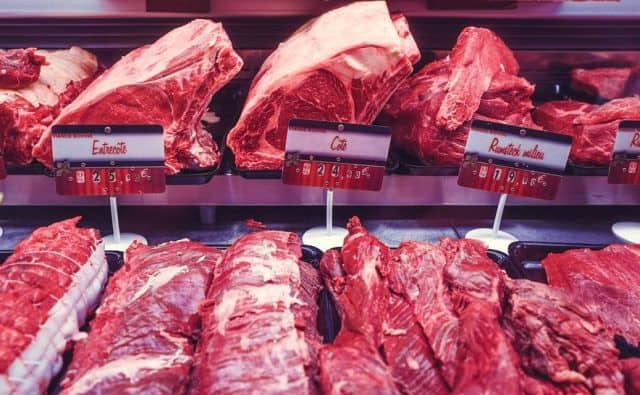 Generally, any meat is suitable for a slow cooker. However, expensive and lean meat cuts such as fillet and back of veal, prime cuts of beef, pork, lamb, and game may be better be on the BBQ or other conventional cooking methods as this may produce better results.

Slow cookers are great for cooking more affordable cuts of meat, anything that has a lot of connective tissue, tendon or cartilage. The longtime at low temperature in a slow cooker will turn the tough connective tissues into soft and juice gelatin. As a result, even lower quality and cheaper meat cuts become part of a juicy tasty dish.